Halloween, is around the corner, but do we know its origin? 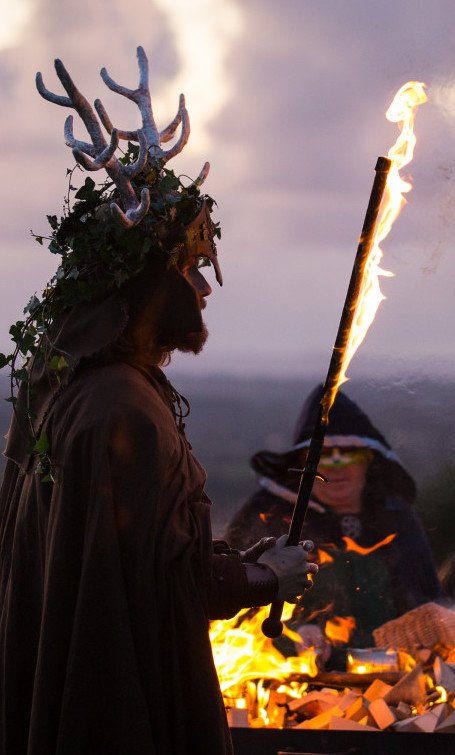 Back in 1200 BC, Celtic culture started to spread around Europe. Their culture is filled with mysticisms rooted in nature and the spiritual world. Many Celts followed Wicca religion —a pagan religion that practiced witchcraft and worshipped nature—Within Wiccan traditions, holidays were celebrated during the changes of the season, marking Samhain as the beginning of winter and the end of the summer—a new year.

During this festive season, Wiccans believed that the veil separating the human world from the spiritual world was especially thin, allowing spirits to interact with mortals. This made families spread altars devoted to their deceased, decorated with displays of bread, fire, and the season’s harvests to guide the souls to their loved ones’ homes. During this tradition, people would tell stories around a circle about the dead, reviving their spirit and feel it close to them.

Day of the Dead

Similarly, post-colonial Mexican syncretism follows the El Día de Los Muertos tradition, where families spread altars with flowers, pan de Muerto, sugar skulls, tequila, mezcal, and other things their loved ones treasured or pursued. Dressing up as La Catrina or El Catrin that are the human embodiments of death itself.

In certain areas of Mexico, like Oaxaca, Day of the Dead is more important than Christmas. Calendas—folkloric street parades with music and mezcal spread throughout the towns and cities. The cemeteries are filled with families playing music for the spirits and bringing offerings. Homes turn on a copal—an incense— at the beginning of the day and leave their doors open, the copal smoke welcomes the spirits back.

When Christians began to spread their religion and traditions, missionaries aimed to delegitimize other pagan religions condemning venerations of the dead as traditions tied to the devil. The pope incited the masses to convert to the Christian faith by accommodating Christian holidays and traditions to Celtic calendars, so what we know of today as the day of All Saints in November 1st was a response to eliminate the “devil malicious” pagan celebration of “Samhain” or “Dia de los muertos.”

Similarly, a lot of Christian saints are responses to polytheistic religions that have different deities. These were methods the Catholic Church used to convert pagan souls.

From Samhain and Dia de los Muertos to Halloween

As Christians adapted Samhain to All Saints Day, the name was slowly altered to All Hallows’ Eve (Hallows meaning Saints).

During Samhain some people welcome the spirits home whilst others feared them. Those who feared them dressed up in costumes in order to confuse the spirits. In Dia de los Muertos, indigenous cultures displayed skulls to commemorate their past loved ones. Slowly halloween evolved to absorb Samhain or Dia de los Muertos traditions that the Christian faith deemed decent. This meant that costumes, bonfires, skulls and candies remained, whilst altars that invoke spirits back were banned.

Consumerism slowly transformed All Hallows Eve into what we know today.

Why celebrating the dead is important

Celebrating the dead is celebrating a passed life. Remembering loved ones, their favourite songs, shared memories and their preferred meal is healthy. It is a day dedicated to reminiscence, focusing people’s energy for a day to bring back past lives. Death is certain, we need to adopt these celebrations to heal our relationship with death,

This is why we invite you to celebrate the real meaning of Halloween: honoring death through acceptance and love for life.