In the lead-up to Christmas, I was sent different articles from different friends who encouraged me to write about the supposed psychedelic roots of the holiday. I welcomed their enthusiasm – “Christmas is pagan” – appreciating the growing interest in European folk traditions.

All of the articles explore the relationship between Christmas and the Amanita muscaria, a red and white mushroom that I first encountered while playing Super Mario Brothers as a child. I was unaware then that Mario’s growth, as he consumed these mushrooms, reflected his openness to the psychedelic experience. It was nearly twenty years later, when two friends went searching for these mushrooms in the north of London that I was introduced to these supposed gifts that grow under conifer and birch trees. I’ve never tried them, put off by the dedication required to prepare the Amanita muscaria for consumption, their toxicity requiring multiple rounds in boiling water before ingestion. But this didn’t put off eastern Siberian shamans. According to popular belief, the shamans would follow reindeer – who had a taste for these red and white treats – waiting for them to eat, digest and finally to urinate. The shamans would then drink the urine, which contained psychoactive materials, and traverse into alternate spiritual realms. Muscaria, in Latin, means fly – hence flying reindeer – and when you combine this with bearded Siberian shamans and red and white mushrooms that grow under pine trees, you have Christmas, or so they say.

Others say the roots of Christmas are the stories of Saint Nicholas, a Christian Bishop from Greece who is the patron saint of sailors, merchants, archers, repentant thieves, children, brewers, pawnbrokers, unmarried people and students. He is also the origin of Santa Claus, whose story was adapted by American poets from the historical accounts of the Saint.

Saint Nicholas was the Bishop of Myra, a small town in modern Turkey, around 280 AD. Living through the Great Persecution – when Roman Emperors killed Christian practitioners for going against the more prevalent spiritual traditions of the Empire – Saint Nicholas fought for his beliefs in the face of execution. He was imprisoned for his behavior, until he was released with the Edict of Milan, when Emperor Constantine ended all Christian persecutions. For hundreds of years, Saint Nicholas was celebrated on December 6th, his feast day, but the Reformation shifted this practice, centring end of year festivities around Jesus Christ.

One of the other articles spoke of Yuletide, and the celebrations that focused on Europe’s winter solstice, the longest night of the year, as days once again lengthen in time. Another article spoke of Santa Claus being an appropriation of the Norse god Odin, who travelled in a chariot pulled by goats. My favorite article was published by National Geographic, which looks at the birth of Jesus through a sociological lens. I appreciated its focus on the familial and social dynamic that may have been present when Jesus was born, how Mary’s pregnancy may have been viewed by her husband and her community, and the importance of a divine intervention to avoid potential death in the face of possible claims of adultery. Although very different to the culture I grew up in, the article’s focus on the relationship between Mary and Joseph inspired thoughts of my own family and the many Christmas celebrations I have shared with them.

I write this article in Lugano, Switzerland, in the home of my father. I grew up with my mother and sisters in Australia, and my Dad was travelling or based in Switzerland for most of my life. Although I remember convincing myself, as a five year old, that I saw Santa out of my sister’s bedroom window when walking around the house one Christmas eve, the myth of the bearded shaman quickly lost potency, and Christmas represented presents, food and family. My Dad would often come and visit us at Christmas, so the day always felt special because it was the brief moment my family would all come together. But as I got older, and my life shifted away from the family dynamic, Christmas celebrations have become more infrequent, as I have often been away travelling or living abroad.

I woke up today in my Dad’s spare bed. I got up and did some yoga, as I usually do, and then went to the kitchen to make porridge, as I usually do. My Dad and I related like we did yesterday, neither of us felt to give today more importance than any other. Dad cooked burgers for lunch, as there had been a special on the best quality patties at the local store. I then went for a walk to the top of the hill behind his home. I discovered a cemetery where Herman Hesse is buried, and a beautiful church, directly across the road, which was open. I went inside. The church was small, the light was dim, there was a mood to the space, accentuated by the recording of a choir singing hymns through speakers attached to the walls. I walked to the pulpit where a model of Jesus’s birth was positioned to its right. It reminded me of my Nonno, my father’s father who would recreate the nativity in a huge model in his living room every year. I left the church and walked back down the hill, towards my Dad’s home. I walked through the door and, soon after, my Dad opened a bottle of Amarone that he had been saving for a special occasion. We clinked our glasses, said Merry Christmas, and then both enjoyed a sip of the wine. It was good and as it descended through my body, I reflected on Christmas and what it means to me: like any ritual, its meaning changes with context and time.

Anton Rivette is a writer and photographer. He leads storytelling at eco-nnect. 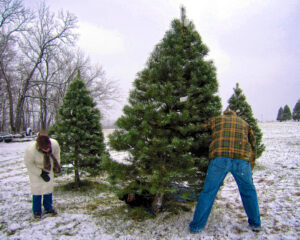 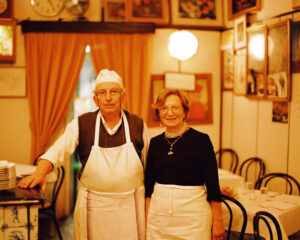