Corals are considered foundational species because they are made up of tiny animals called polyps, they are distant cousins of jellyfish. A coral can hold thousands of polyps which make up the growth of the coral reef. A polyp is mainly made up of a stomach with a mouth on top and a skeleton that is part of the reef. The skeleton of the coral is formed by the polyp’s ingestion of dissolved minerals from the water mixed with proteins. This process then deposits lyme stone that becomes  the beautiful skeleton structure.

A coral is made up of a symbiotic relationship with an algae friend called zooxanthellae. This algae lives inside the cells of the polyps. These guys are responsible for most of the nutrition of the corals, since they use sunlight to start photosynthesizing it into sugars, oxygen, and fats. They are also the determinants of the different colors of coral reefs. Polyps produce vitamins that are vital for the zooxanthellae survival, such as Carbon Dioxide, Phosphorus, and Nitrogen. Also, the polyps provide a home for the quirky algae. The symbiotic relationship can be compared to friendly marine roommates.

A coral is the marine alter ego of a tree. Thus coral reefs can be considered the oceans’ forests. Coral reefs contain the most biodiverse ecosystem and marine habitat, in which more species are being identified throughout time. They also protect the coastlines from damaging effects of wave action and tropical storms. Besides helping the sea’s biodiversity, they also help out humans in economies of scale by providing hot spots for fishermen to catch some fish, distribute it, and provide an income for the local population and their families. Also, coral reefs have become great tourist attractions. The influx of tourism creates jobs and develops the economy, making coral reefs coveted economic assets. Scientists also benefit from these creatures through medical innovations that may help treat specific diseases and conditions.

Sadly, but unsurprisingly to this point, worldwide coral reefs are dying. Today, more than 20% of the world’s coral reefs are vanishing due to increasing ocean temperatures. The warmer temperature makes the coral reject the zooxanthellae which begins the bleaching process in which just the structure of the coral is kept alive as a ghost. As a colonial organism, neither of the two organisms can survive without each other, eventually vanishing entire ecosystems from our oceans.

The warmth of the water increases its acidity, making it more difficult for corals to build their hard exoskeletons. Rising sea temperatures are a direct consequence of increased CO2 levels in the atmosphere due to excessive burning of fossil fuels. Scientists estimate that if the carbon emissions won’t slow down, by 2050, all coral reefs will dissolve at 560 parts per million of CO2 emissions. A study in 2010 indicated that we were at a point where carbon emissions are at 390 parts per million, portraying the terrifying scenario of an ocean without the beauty of its coral reefs.

Meanwhile, in Guanacaste, Costa Rica, a project named “Simbiosis” was created by experts from CIMAR (Research Center of Marine Biology and Limnology), the German GIZ foundation, and Península Papagayo. They have all been working together in the restoration of the coral reefs at Culebra Bay. In the late 90s, 70% of the coral reefs of Culebra Bay had living corals, whilst today only 3% of corals are still alive.

Therefore, biology students from Costa Rica’s University worked together to grow corals in a lab, making them strong enough to withstand higher temperatures. Then the group transplanted them into the sea. It took a few trials to finally find an adaptable environment in Jicaro beach, in which spider-like structures hold the corals and receive constant care.

One of the biggest threats to the survival of these corals is the red tide’s algae that block the sunlight from the corals, making it impossible for the polyps’ organisms to go through the photosynthesis process. 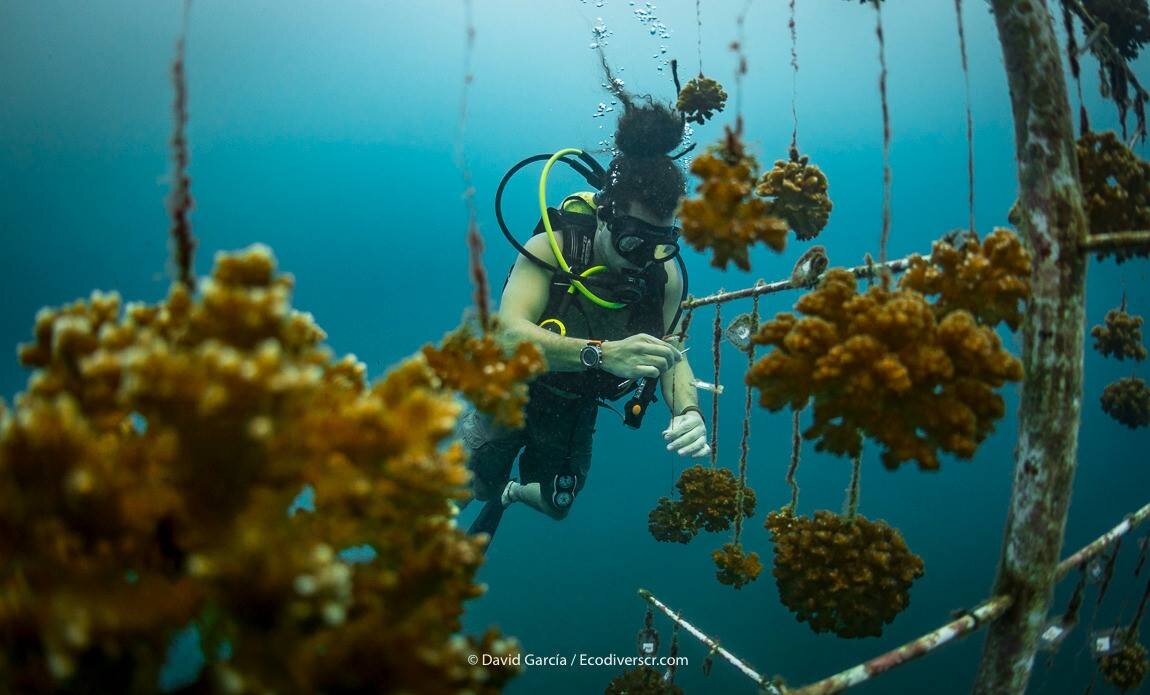 By having volunteers and scientists of the project cleaning the algae from the structures and the corals once every two weeks, they assure that the growth rate of the corals will increase and recreate the ecosystem of the 90s, bringing new life to the reef.

Once the success can be declared of this project, the idea is to reproduce these corals around different coasts of Costa Rica, and hopefully share the information to other countries in order to unite to save corals.

This initiative can create a new wave of eco-tourism in which nature-lovers can get some fieldwork done by helping the community, the country, the world’s coral reefs, and the biodiversity of the oceans.

In the meantime, if you are reading this from your home, try to be more conscientious of what fish you consume, of whether the fish comes from long distances, if the fishermen act responsible towards the environment, use coral safe sunscreen, or you can simply go plant-based and do your best to reduce your carbon footprint, not only for humanity, but for our oceans too—it is the most effective way to reduce your carbon footprint.