US’s withdrawal from the Paris Agreement

First of all, what is the Paris Agreement? who signed it? and what is it trying to achieve?

Back in 1992 in Rio de Janeiro Brazil the international political clout first had a convention known as the Rio Earth Summit, whereby the UN Framework Convention on Climate Change (UNFCCC) was adopted and put into action in 1994. Since then there have been Conferences of Parties (COP) to review whether the Convention has been well implemented by the 195 member parties. In December 2015 Paris held the latest conference whose aim sought to “achieve legally binding and universal agreement on climate, with the aim of keeping global warming below 2°C.”[1] The Paris Agreement officially unfolds in a 12-page document that essentially subjects each member state to agree to the following terms:

In short the agreement aims at the transparency of country’s adoption and implementation through the submission of Nationally Determined Contributions (NDC) every 5 years. These would avow the member states’ proclaimed objectives as well as their domestic mitigation strategies of how said objectives will be pursued. Nonetheless the NDCs are standards and goals imposed by the member state themselves, and meeting these targets are not in effect penalized in any way. So what is Trump really worried about?

Seeing as the implementation of the agreement is nation specific, Trump’s decision to withdraw not only from the Paris Agreement but from the UNFCCC entirely, seemingly rests on “the draconian financial and economic burdens the agreement imposes on the country”[3] and how China and India have less obligations despite their reputation as incessant polluters.

Firstly, the green economy is an opportunity booster. It does not dampen the economy as Trump suggests, rather it bolsters a new up and coming industry. Job creation and investment in renewable energy accounted for a $290 billion market in 2015, a figure that has been constantly growing since[4]. A Greenpeace study shows that green energy creates 4x more jobs than oil[5] and in 2016 solar employed 373,807 people in the US alone.[6] In 2017 clean energy accounted for 9.8million jobs worldwide with China taking the lead and employing 3.6 million people.[7] 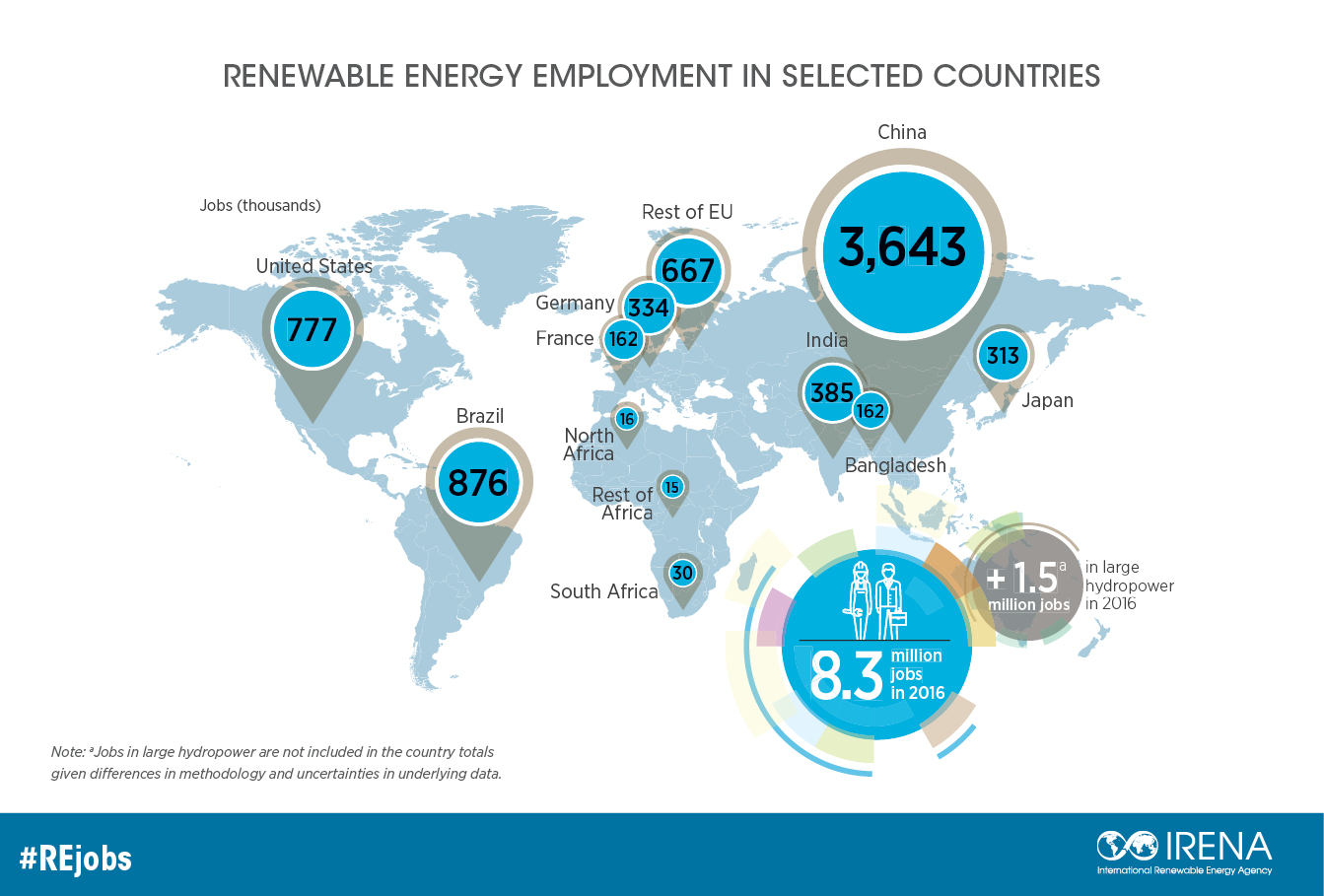 [8] Renewable Energy Employment around the world

Globally the green market is growing exponentially, with the US as no exception. Within the sector organic foods is leading the trend with over 82% of US households buying organic and Americans spending over $50 billion on organic annually.[9]

This goes to show that President Trump’s economic fears are obsolete and not in line with American sentiment. After his decision to leave the Paris Agreement the public outcry was loud, but the private sector also strongly admonished the leave—twenty-five companies, including Apple, Facebook, Google, Microsoft even went to the extent of buying full-page ads in the New York Times in hopes of appeasing Trump’s economic fears.[10] If the top American companies are not the workers and businesses Trump so adamantly claims to protect, who is he actually referring to? In his Presidential Address one cannot fail to notice a recurring word: coal. Trump’s decision only directly helps coal workers, an industry that employs the same number of people as Whole Foods[11]. Perhaps these include the majority of his voters, but it clearly does not represent American businesses or their interests.

Whilst President Trump still fumbles to claim that climate change is a Chinese hoax and inaugurates the opening of a coal plant in the US in the 21st century, China has plans to invest over $360 billion[12] in renewable energy in the coming years. Might this be the hoax Trump so strongly vouches for? Are the Chinese simply one-step ahead of the game? Most Certainly. Like many of President Trump’s arguments his decision for leaving the Paris Agreement is completely unfounded: his economic apprehension misinformed and his claim of the US “being the greenest country in the world”[13] simply false.