The Competition for Sustainable Architecture

Architecture is an art form, an art in which we have learned to depend on to live, one that provides structure, a safety net, and most importantly; a home. But the home which really matters, our planet, is fading, and the art of construction has become unsustainable. Making architecture sustainable is vital in order to conserve this art form and our Earth simultaneously. This is the purpose of the Jacques Rougerie Foundation and its architectural competitions.

Are Amphibious Cities the Future?

The Jacques Rougerie Foundation has as a mission to ¨encourage boldness and innovation in architectural undertakings as well as artistic creation related to Sea and Space in order to bring out the next Leonardo da Vinci, Jules Verne, Gustave Eiffel, Frank Lloyd Wright, Le Corbusier, Klein… of the 21st Century.¨ It aims to foster a relationship between humans and their natural environment wanting to depict the challenges that we are facing in the world as well as the world we want to build for tomorrow. This is why the Foundation has built a competition where the young generation is able to expose their visionary projects, with a resilient architectural approach and innovative artistic expression.

In 2020, Lenka Petrakova received the Grand Prix from the Foundation Jacques Rougerie, for her innovative and sustainable project named ¨the 8th continent¨. The purpose of her project was to tackle an issue that is very present for environmentalists; marine pollution. It is one of the most detrimental issues for our planet as is in our fight against climate change. According to the International Union for Conservation of Nature (IUCN) at least 8 million tons of plastic end up in our oceans every year and makeup 80% of all marine debris from surface waters to deep-sea sediments. Marine species most likely get entangled in it or ingest the plastic debris ultimately causing injuries and deaths, or ending up on our plates. Furthermore, due to ocean currents, plastic waste becomes accumulated in specific areas namely the Great Pacific Garbage Patch (The 8th Continent). With her project, Petrakova proposed a floating station that collects plastic debris from the surface of the water located on the Garbage Patch. Her aim is to use marine science and knowledge to showcase the reality marine environments face, not as a new phenomenon, but as the result of centuries of human – ocean interactions. 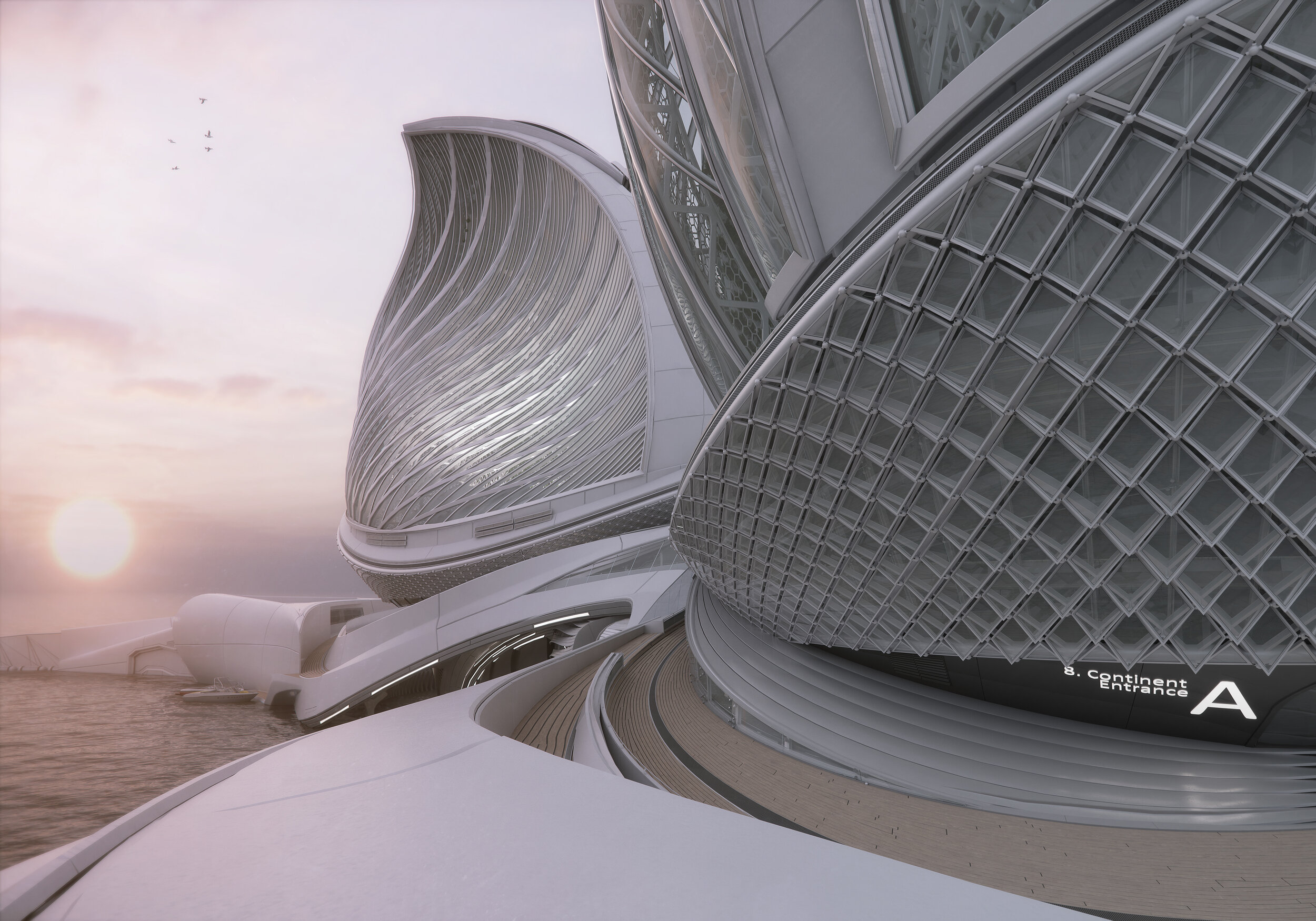 The station consists of five main parts: (i)  The barrier that serves to collect waste and harvest tidal energy; (ii) The collector, where waste is sorted, biodegraded, and stored; (iii) the research and education center to study and showcase aquatic conservation; (iv) greenhouse where plants are grown and water is desalinated; (vi) living quarters with support facilities. One of the most significant things Petrakova made sure to consider is the relationship between the 8th continent and the environment, not only in the floating station but also in the complex interactions with the ocean. “[Creating a station that is] first influenced, transformed and organized by ecology systems, allowing architecture to recreate ecology reciprocally¨.
Learn more about the project
Learn more about sustainable urban planning